The Renaissance fountains in Rome, mostly commissioned by nobles, popes and high-ranking personalities, were created to embellish their palaces and gardens. Also used as an urban renewal, they interrupt a monotonous row of buildings, reducing the width of a square by inserting an artistic element. The development of new knowledge and hydraulic techniques amalgamated with the artistic aspect, make Renaissance fountains works in themselves, architectural inventions, thanks to the likes of Giacomo Della Porta, Carlo Maderno and Gian Lorenzo Bernini.

Let’s find out some of them: 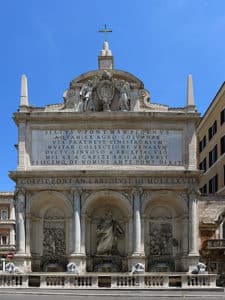 Also known as the Acqua Felice fountain, in honor of Pope Sixtus V, to supply the districts of the Viminale and Quirinale hills with water and, above all, his villa Montalto located on both hills. It was inaugurated on June 15, 1587. In the central niche Moses is depicted indicating the waters miraculously escaping from the rock, the work of Leonardo Sormani, with the collaboration of Prospero Antichi, known as Bresciano. In the side niches, two high-reliefs illustrating biblical episodes related to water: on the left the Aronne guides the Jewish people to the water that gushed from the desert, by Giovan Battista Della Porta; on the right the Gideon selects the soldiers looking at their way of drinking by Flaminio Vacca and Pietro Paolo Olivieri, also authors of the angels that support the coat of arms of Sixtus V.

2. Fountain of the Turtles

The Fountain of the Turtles is located in the small Piazza Mattei in the center of the block of the buildings that belonged to the powerful Mattei family. Built on a probable design by Giacomo Della Porta in 1581, the works were carried out by the sculptor Taddeo Landini, who was to have made four ephebes and eight dolphins, first planned in marble and then in bronze. The turtles that the ephebes seem to push and quench their thirst in the upper basin, and which gave the fountain its name, were included in a 1658 restoration carried out at the behest of Pope Alexander VII, and are attributed to Gian Lorenzo Bernini or Andrea Sacchi.

The Marforio fountain is a large 1st century Roman marble sculpture, possibly depicting the god Neptune, the Ocean or the Tiber. A document dated 1588, traces the name of the fountain from the name of a Marioli or Marfuoli family, who had a property near the Mamertine Prison, in the Fori area, where the statue would have remained until 1588. Subsequently, at the behest of pope Sixtus V, was first moved to the Piazza di S. Marco and then to the Piazza del Campidoglio, to adorn a fountain designed by Giacomo Della Porta. In 1594 the restoration provided for the total reconstruction of a part of the face, of the right foot and of the left hand holding a shell. In the mid-seventeenth century Pope Innocent X had the statue and fountain moved again, due to work necessary for the construction of the Palazzo Nuovo which was to complete the Piazza del Campidoglio. The statue and fountain were then placed in the courtyard of the Palazzo Nuovo itself, in the Capitoline Museums, where they are currently located.

The travertine work, built between 1588 and 1593, is divided into four parts using the rectangular niches specially created in the corners of the crossroads. The different subjects, however, are grouped in similar pairs: two bearded male figures, allegories of the Tiber and the Arno, facing two female ones respectively, representing Diana and Juno. The first two symbolize Rome and Florence, while those of Diana and Juno are symbols of Fidelity and Fortitude respectively. The design of the fountains of the Tiber, Arno and Juno is perhaps by Domenico Fontana, although art historians tend to attribute the Arno and the Juno to Pietro Paolo Olivieri. The fourth, that of Diana who turns her back to the north, is attributed to Pietro da Cortona.

5. Fountain of the Terrina

The fountain of the Terrina is a Roman fountain that Giacomo Della Porta designed and built in 1590 on commission from Pope Gregory XIII. In 1899 it was moved from its original site in Campo de ‘Fiori, to make way for the monument to Giordano Bruno, and remained for many years in a municipal warehouse. In 1924, the original “Terrina” was recovered and repositioned, inserted in a sort of square pool lower than street level, the fountain is currently located in Piazza della Chiesa Nuova.